I could guzzle gallons of this stuff and never get tired of it. My favorite is grape; then orange; then cherry.

I have had some bad experiences with Kool Aid but this was simply because the person who made it skimped on the sugar ration. I cannot overstate how crucial it is that one use copious amounts of sugar when preparing unsweetened Kool Aid. Of course, if you are using the pre-sweetened version, simply make sure you don’t over-dilute the powder base. 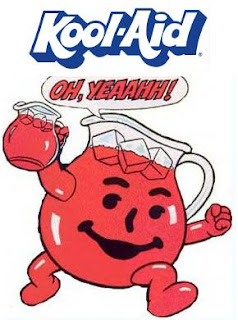 If I had a Kool Aid Guy costume I’d go dancing around town, making people happy, pouring them Kool Aid. I think there should be many, many, many more Kool Aid people in this ol’ world. I hope my kids grow up to be Kool Aid dancers.

Finally, I like the fact that Kool Aid is spelled with a “K”. I think that’s very clever and have always wanted to ask the creators of Kool Aid why they chose that spelling. I’m sure there is probably some sophisticated reason and I think if I found it out I would have uncovered a Deep Secret.

I must have had a deprived childhood, because I don’t get the whole Kool-aid thing. I actually think it’s pretty gross, to tell you the truth. From my babysitting experience, I also know that it stains like crazy, which is a really stupid attribute to give a drink for kids. Kids. I have never bought Kool-aid for my own kids. I also think it’s annoying to make because you have to add sugar to it. Kind of defeats the point of an “instant” drink, no?

We recently got given a few packets of generic kool-aid stuff, and my hubby and kids are in rapture. I opened the fridge the other day and it reeked of grape kool-aid. Mmmmm, tasty. Not.

When I was a kid and we would go on furlough, I was also kind of wigged out by the commercials featuring the giant Kool-aid pitcher on wheels that would come blasting through a wall, or some such thing. I could never really understand why the kids were so happy to see it, and did not run away screaming.

As a poor deprived missionary kid, I was subjected to Ecuador’s version of Kool-aid, Yupi. See?

We drank the peach flavor. It was marginal, but passable.

My hubby and kids are also fans of Tang. GAAAHHH! Recently we found maracuya (passion fruit) flavor, which was the least disgusting powdered mix drink I’ve had lately. My ridiculous daughter thinks that the Tang is better than FRESH maracuya.

Posted by Troy and Heather Cady at 8/08/2008 08:18:00 PM
Email ThisBlogThis!Share to TwitterShare to FacebookShare to Pinterest

1. I love kool-aid as well and drank a lot of it growing up...I think it's why I'm balding prematurely (well, coffee too).

2. Why is it so easy to imagine Troy as a kid all hopped on kool-aid with a red mustache?

3. Was Troy drinking Kool-Aid while writing this? Because this post seemed to be extra funny.

Thanks guys for making me laugh while Jen was trying to get Maisie to sleep!

Two things..
1)Sorry about the Kool-Aid.
2)Tang rocks. We stocked up in Spain.

Hey Megan! Don't feel bad about the Koolaid :) the fam is loving it, and you know I exaggerate for effect :) That's hilarious about the Tang! What flavors did you get? I think we already finished the Countrytime Lemonade and the Crystal Lite :)

1. I've often wondered about why you're balding. That explains it. ;-)

2. What exactly are you trying to say in number 2?

You don't have to apologize. I thank you profusely from the bottom of my heart!

Everyone: Kool Aid is spelled with a capital K and a capital A. Please do not take its name in vain by spelling it with lower case letters. Let's grant it the respect it deserves, please!

I used to love Tang when I was little. it is highly superior to Kool Aid.

now, though, I'm not sure I'd drink either.

In current idiom to "drink the Kool-Aid" is to follow very bad advice, in reference to the Jonestown massacre.

e.g. "Went to the complimentary weekend and 90 minute presentation. Drank the Kool-Aid. Have you heard of Amway?"

Emma is getting out our stash of Kool Aid that we brought from the States two years ago as I write this. She found: a pack of grape and two cherry packs and then said "I think Heather will think this is enough!":)

PS Tang gets my vote!

I wasn't sure if it was the kook aid, the coffee, the coke, the mcdonald's orange drink, or just my DNA that caused the balding...but now it's settled. The 'Yo, Kool Aid' pitcher and his follicle destroying powder did it! My dad, grandpa, and uncles must have drank a lot of kool aid too!