I receive the iTunes New Music Tuesday newsletter. Every so often it will feature iTunes picks for various genres of music. Some time ago they put the spotlight on classical music. That month they included mostly instrumental pieces, but one album consisted of choral music. I had a listen to the excerpts and was hooked, so I bought it promptly.

The work: Cloudburst and Other Choral Works by Eric Whitacre.

If you have a chance, buy this album. Then, block out an hour to just sit down and soak in the beauty.

This morning, I listened to the title piece on my walk home. I turned up the volume so I could catch all the portions sung in pianissimo. It’s a unique piece, because at one point in the song you hear the sound of rain. When I first heard the song, I didn’t think much of it, but this morning, listening to the song more intently, I picked out that the raindrop sounds were being made by the clapping of hands. I was dumbstruck. Amazing, in a word.

It brought me back to my days in college when I had the privilege of singing in a first-rate choir. One song included a percussive sound created by the syncopation of human voices. There really is no substitute for simple a capella choral music. It made me miss those days. I had no idea what a privilege it was to sing in a choir like that.

I love singing in choirs; there is something so stirring and satisfying about it. I haven’t been one in a long time.

The absolute best choir experience I have ever had was during high school. Back in the day, the mission that I grew up with had big concerts ever year in honor of Quito Days. We sang a bunch of different music, but my favorite part of the concert was when we donned traditional embroidered Ecuadorian dresses and sang a whole selection of beloved Ecuadorian songs.

People in the audience were super participative, clapping, singing, shouting “Viva Quito!” and “Viva Eugenio!” (our well known and loved director!) Participating in those concerts was a huge adrenalin rush.

The concerts were held in the colonial part of Quito at the Teatro Sucre, which was a pretty grand experience. Here, you wanna see? 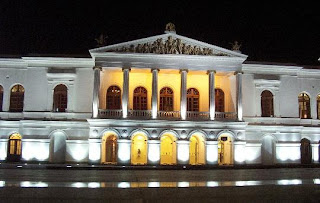 I would have scanned the photo that I have of the Coro Vozandes performing. But I couldn’t find it. And of course, when I did get the photo back, guess who was the ONLY person you couldn’t see? Yep. Me. I was the only person in the whole choir that was blocked by the director because of the angle the photo was taken from.

Posted by Troy and Heather Cady at 3/31/2008 07:40:00 PM
Email ThisBlogThis!Share to TwitterShare to FacebookShare to Pinterest

Choir. Choir. For a bunch of years in my most immediate past life, "choir" to me meant "work," (But, it was *good* and usually fun.) because I was the director.

Here in Chicago, I joined a choir for a Martin Luther King day performance of "Too Hot to Handel: Jazz-Gospel Messiah." It was a *grand* production with a mighty big choir, 45 piece orchestra, and some whiz-bang soloists. I had a blast being just a plain, ol' bass. It was a great thrill to watch the director do all the things that I know directors have to do and deal with ... a thrill, because it wasn't ME doing it!

I had a friend make a recording. So if you feel like downloading this thing, I think you'll get a kick out of listening to it. Listen for my voice in the bass section (*grin*).

Really *do* listen. It's quite good . The whooping and cheering you may hear is my friend, Crystal, who wore the sneaky, clandestine microphones into the concert!